Home » My Life » The Elopement of Chris and Cheryl 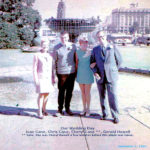 The year was 1969. I had just spent the better part of a year on Baffin Island near a village called Cape Dyer. I had quit my job with the phone company in Montreal the previous fall and started work on the DEW line. Now it was mid August and I was home on leave. Cheryl and I had been apart for many months. We had been dating since August 1966 and if you don’t know that story then maybe you should see the article The Blind Date or How I Met Your Mother!

We jumped into my father’s 1967 Camaro and headed west for a three week vacation. It was a great trip, we were dying to get to the Rockies and we drove like maniacs. I recall getting to Wawa (yes Wawa Ontario), a distance of nearly 800 miles and the next day, we intended to head for Thunder Bay at the top of Lake Superior, as no campsites or hotels available. We ended up driving another 800 miles, all the way to Winnipeg. We only managed 600 miles the third day and camped in the “Highlands of Saskatchewan”, the guide book said that the campsite would be heavily wooded. The writer of that travelogue had never seen a real forest. We camped at Maple Creek. The campsite was quite new; the trees were no more than twelve feet high and several tens of feet apart. So much for the heavily wooded highlands, we camped on the highest knoll we could find and fell asleep only to be awakened by a thunder storm to end all thunder storms. Afraid to get out of the tent and stand up which would have made us the highest point around, we crouched in our tent seemingly for days waiting for the storm to end.

We awoke more tired than when we went to sleep and continued west. As we approached the outskirts of Calgary, the exhaust system on the Camaro started to get louder and louder and we knew we had to find muffler shop. There’s a story here about how 1967 Camaros in Calgary don’t need new mufflers and tail pipes in 1969 because they use a lot less salt on the roads than did Montreal at that time. I’ll skip that tale and suffice it to say we lost a few hours and continued on to Banff the next day!

Finally in the Rockies, we enjoyed a few days of hiking and sightseeing. The weather was perfect and life was good. We had to press on if we wanted to see the Pacific Ocean and that’s what we did. We truly enjoyed our visit to Vancouver, hopped on the ferry to Vancouver Island and ended up in a beautiful campsite near Victoria BC.

It was Friday August 29, 1969 and we decided that day to get married. We were already engaged and neither of us was looking forward to a fancy wedding. Seeking some advice from others we headed off to the Provincial Parliament buildings in downtown Victoria and with some fear and trepidation, we stepped into the registrar’s office and told the clerk we wanted to be married. The clerk asked how long we’d been in British Columbia and we answered, “Just one day”. That was the wrong answer, had we known, we would have told a mistruth and said two days. British Columbia, it turns out, has a 48 hour residency requirement. We filled in some paperwork and committed to be back the next Tuesday September 2nd as Monday was Labour Day and a provincial holiday.

We had already struck camp and we simply headed south to Seattle and Olympia Washington to do some more touring and visit some friends Dick and Judy in Olympia. Dick actually gave me a tie to wear the next Tuesday as I had none with me.

With some pangs of guilt, Cheryl and I called our folks over the weekend to let them know of our plans to be wed the next Tuesday at 9:00 AM. The calls were long and arduous but they did not diminish our resolve to be married in a day or so.

On the Monday we headed back to Victoria, arriving at the campsite after dark. We had calculated that the time we spent the week before and the stay overnight on Monday added up to at least 48 hours so we fulfilled our residency requirement. However we had forgotten one thing, we needed witnesses for the ceremony. Our tent was up and we headed for the nearest campfire. We met an older couple, probably as old as we are now, from Sacramento who when asked “What are you doing tomorrow morning?” answered “We’re heading home.”. I guess we looked crestfallen as they asked “Why?”. We told them of our plans for the next day. A deal was struck. We’d all break camp the next morning, head into town and they would be our witnesses and then they’d head off in the direction of California. We were truly thankful as it had taken us some time to screw up the courage to ask and by now many of the other campers had bedded down for the night.

So now it’s Tuesday September 2nd and we’re off to the city with our new friends. As we parked at the Parliament Buildings, we were amazed to see Penny (my sister) and her husband Ron as well as my Mum and Cheryl’s Dad. Penny and Ron were actually living in BC for the summer at a lake a few hundred miles away and had driven down and somehow my Mum and Cheryl’s Dad had flown over to see us. We were truly happy that they could come.

Upon meeting our relatives, our new found friends from Sacramento offered to bow out and let our family witness the ceremony. Cheryl and I convinced them to stay. I was going to say that the wedding went off without a hitch but that would not have been true if you catch my drift. Cheryl in her shabby little blue dress (something blue) and me in a V neck sweater with a tie borrowed from Dick (something borrowed) in Olympia were married at 9:00 AM in Victoria BC on September 2nd 1969. Looking back over the last forty years, Cheryl and I feel that we’ve been happily married for five or six years, we can never agree on which years but we always agree that the current year is one of the happiest.

« How do you like your coffee?
Introducing “The Goose” »

2 thoughts on “The Elopement of Chris and Cheryl”